1 / 2
While contemplating the 150th anniversary of Flushing Town Hall, I wondered what the Civil War soldiers thought about as the full moon lit their paths, or a new moon hid them from their foes; local families gazing up at a moon their loved ones were seeing in the south as they longed to be home again. through the Underground Railroad, Quakers, whose 17th century Meeting House still faces Flushing Town Hall, helped to save multiple lives under the cloak of night lit only by shifting lunar phases. Once we entered space and landed on the moon, our perception of it was forever altered.

Patterns are formed by days of the week for each full moon during July and August 1862-2012 by decade. The 7 days correspond to 7 pitches in a western scale. While the moon positions were based on data, the variations of color as well as pitch regester and dynamics were purely aesthetic decisions. The new moon, although unseen, is equally impactful and I transcribed the pitches into Braille music notation.

To hear the music, click on the sound button below the image...
Moon Song 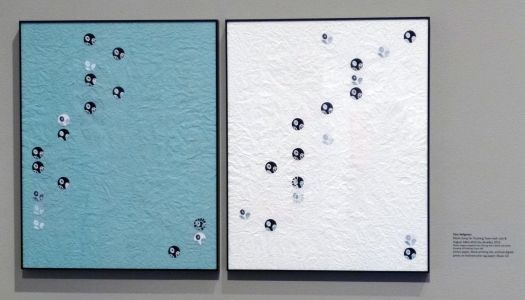 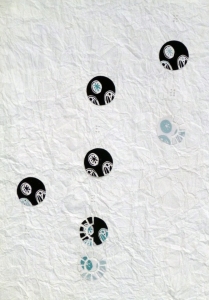